Analysis of Full Refundability of the Child Tax Credit Without Expansion

By Jack Landry and Stephen Nuñez

According to recent reports, the Biden administration, as part of its negotiations over the Build Back Better legislative package, has proposed allowing the increase in the dollar value of the Child Tax Credit (CTC) implemented as part of the American Rescue Plan Act (ARPA) to expire after a one-year extension but making its full refundability provision permanent. This contrasts alternate proposals, which would preserve the increase in CTC amount, an additional $1000 for children 6 and up, and an additional $1600 for children 0 to 5, but reintroduce a phase in/earned income requirement. In a previous brief we discussed the implications of restoring the Tax Cut and Jobs Act (TCJA) era (pre-pandemic) limited refundability equation. In this brief we investigate the Biden proposal and compare its cost and poverty implications with that previous proposal and with the full expansion under the ARPA. The structure of these proposals, full refundability alone versus everything but full refundability, allow us to quantify the relative contributions of the more generous credit amount and the full refundability of the credit.

The main findings are as follows:

We summarize these findings in Figure 1 below.

The Structure of the CTC Expansion

The Biden administration’s expansion of the CTC had three main parts:

The third revision, full refundability, makes the CTC unconditional such that low income parents could receive the full benefit regardless of specific level of earnings or work status. The partial refundability of the TCJA-era CTC mimicked the phase-in structure of programs like the Earned Income Tax Credit: only a portion of the CTC was available to those with low earnings (and none for those with no earned income), and that portion increased up to a maximum as earnings increased.  In a previous brief, we considered the implications of leaving the first two components of the CTC expansion in place and reverting back to the TCJA-era limited refundability formula, as this plan or something like it had been proposed by critics of the ARPA expansion both as a way to limit costs and to prevent the emergence of an “entitlement society.”

More recently, the Biden administration has proposed allowing the expanded credit amounts to expire after a one year extension but making the full refundability introduced under the ARPA permanent (1). Figure 2 presents a graphical comparison of the benefit formula under full expansion (green), full refundability only (blue), value expansion only (orange), and the TCJA-era pre-expansion CTC (pink) for a married couple filing jointly with two children between the ages of 6 and 16. 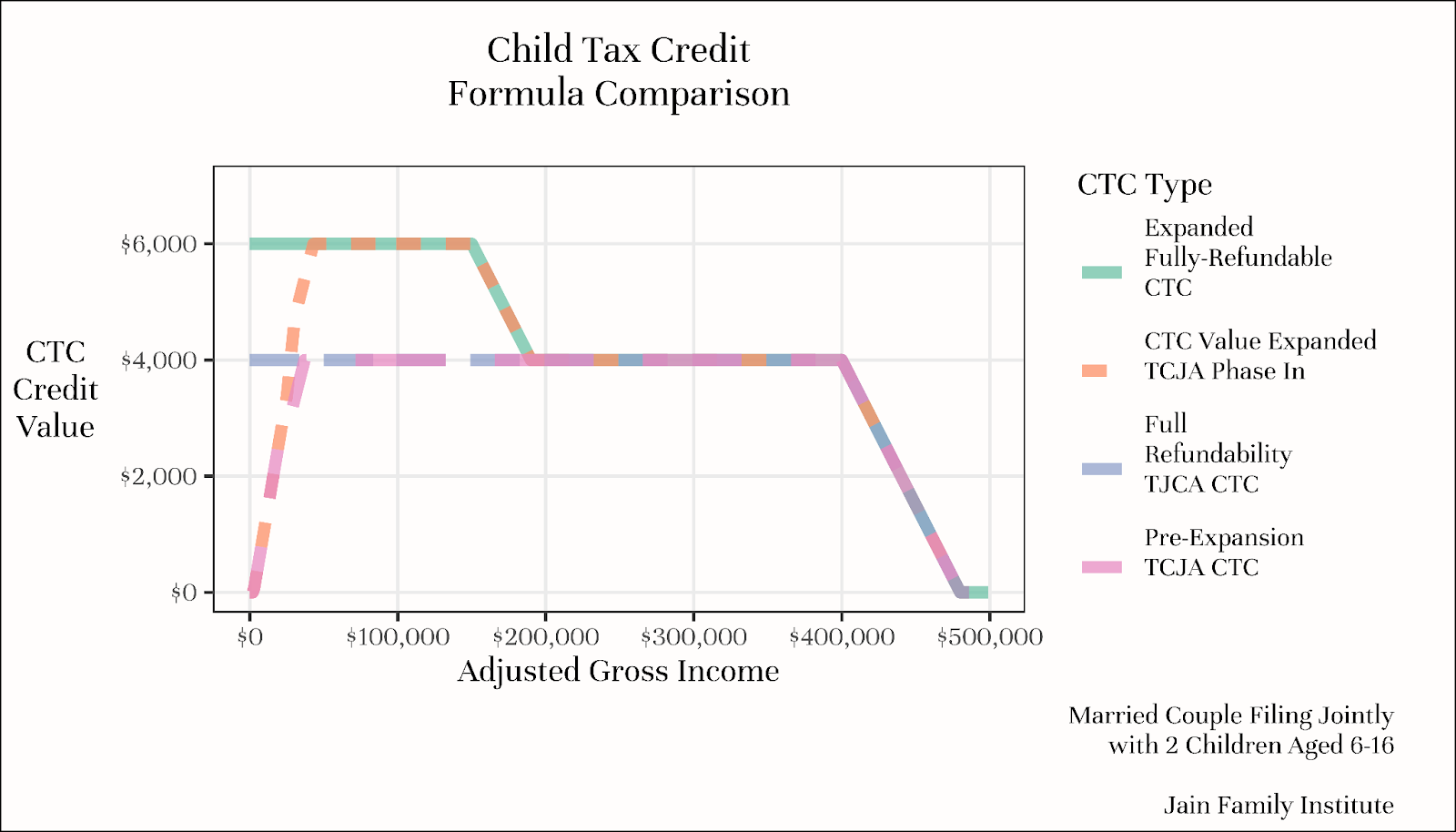 To estimate the impact of the CTC on family income and poverty, we use the 2019 Current Population Survey’s Annual Social and Economic Supplement (referring to 2018 incomes), adding the value of the expanded CTC with and without full refundability relative to the CTC under the Tax Cuts and Jobs Act (2). Similar to other analyses, we estimate that the fully-enrolled (3) and expanded CTC reduces child poverty by 40 percent over the TCJA-era status quo.

Implementing a CTC reform that solely made the benefit fully refundable would have instead reduced child poverty by about 19 percent, about half the impact of the full expansion. By contrast, implementing a CTC expansion that retained the TCJA limited refundability formula would instead have cut child poverty by just 7 percent—less than a quarter of the impact of the unadulterated expansion.

Figures 3 and 4 summarize the poverty reductions of the various expansions over the pre-pandemic status quo: 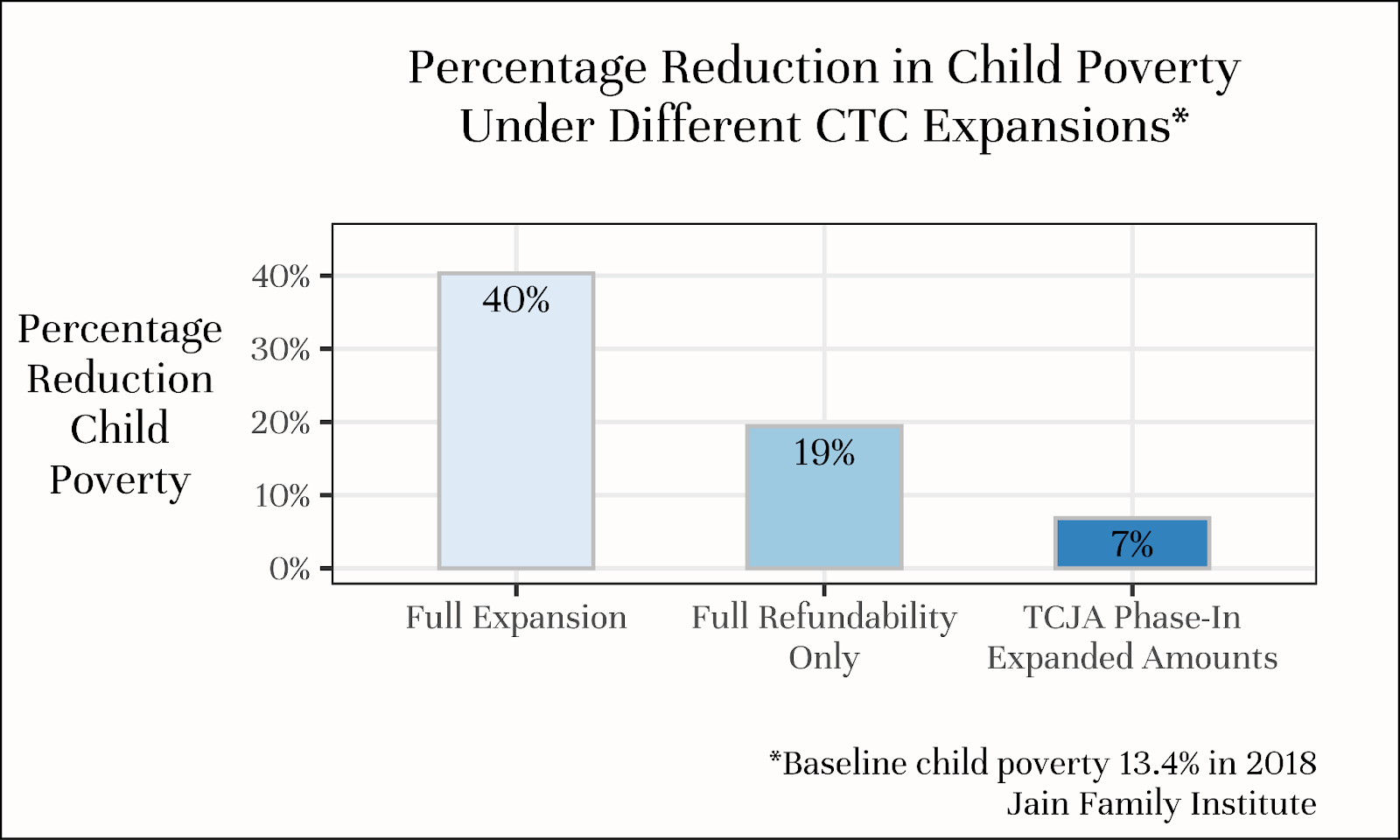 Deep poverty and the Poverty Gap

When it comes to measuring the relative impacts of these CTC proposals, defining poverty dichotomously such that anyone below a specified threshold is “poor” and anyone even one dollar above that threshold is not can mask the potential impacts of policies targeted toward the very poor. Depending on its design, a program like the CTC could greatly alleviate material hardship while having a minimal impact on the poverty rate. For example, a program that brought every currently poor household to $1 less than the poverty line for their household size would have no effect on the poverty rate, while one that gave $2 dollars to each household a dollar below their poverty line would. However, the first program would do much more to combat material hardship than the second.

Compared to a CTC benefit expansion that reverted to partial refundability,  a CTC reform that only extended full refundability would ensure that some money, though insufficient to affect poverty status,  still goes to those with very limited or no earnings, but it also means there would be less money for those further up the income distribution, including those for whom the loss of credit increase would change their poverty status. To more fully explore the effects of each policy proposal on material hardship, we also present effects on deep poverty (calculated as 50 percent of the supplemental poverty measure threshold) and on the average poverty gap, which is the amount of money it would take to bring a household over the poverty line. The latter in particular is useful since it is not a dichotomous variable and thus captures movement below the poverty threshold.

We find that with full take-up, the ARPA child tax credit decreases deep child poverty by 49 percent over the pre-pandemic status quo; full-refundability alone decreases it by 32 percent; and, despite the expanded credit amount, restoring the TCJA phase-in would reduce it by only 3 percent. Figure 5 summarizes this finding. 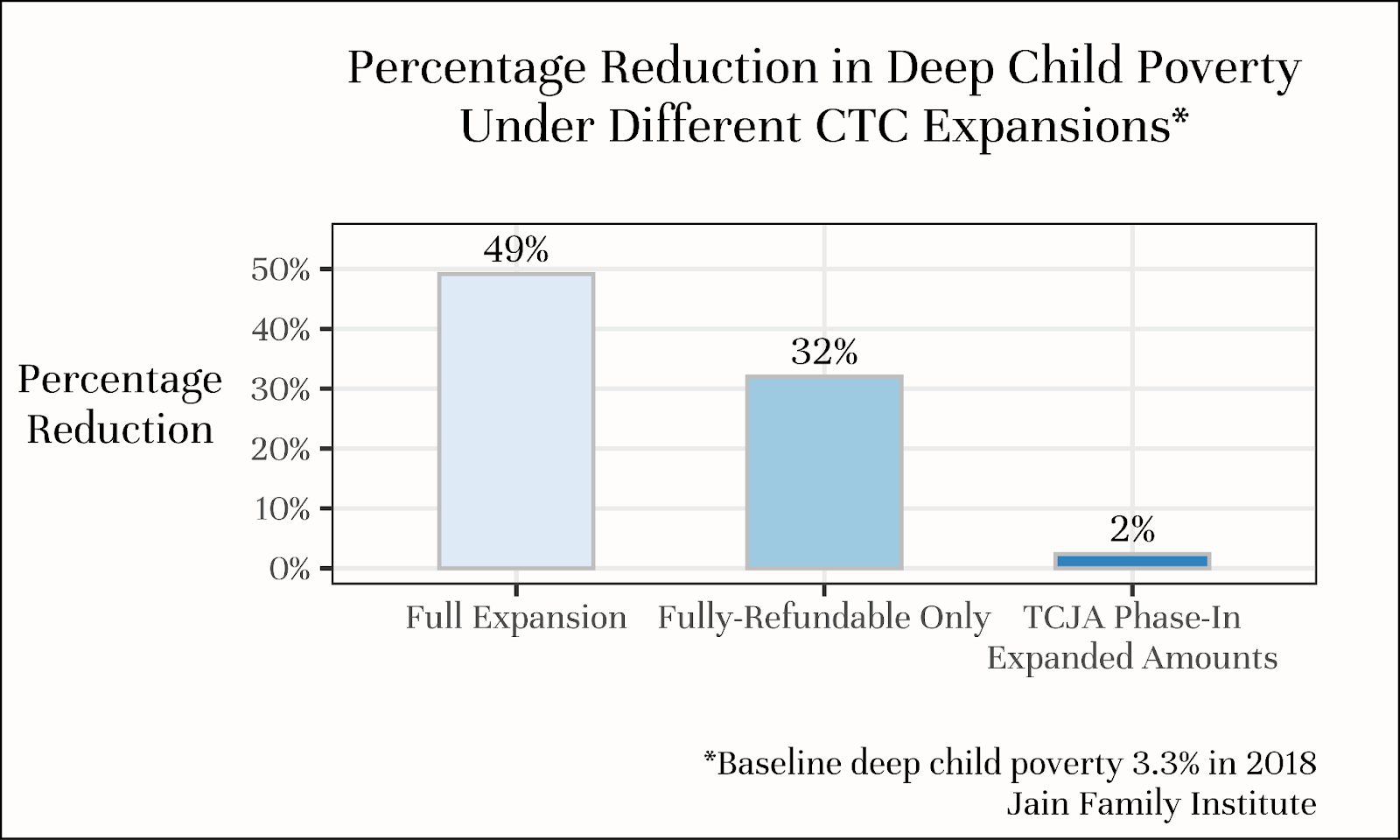 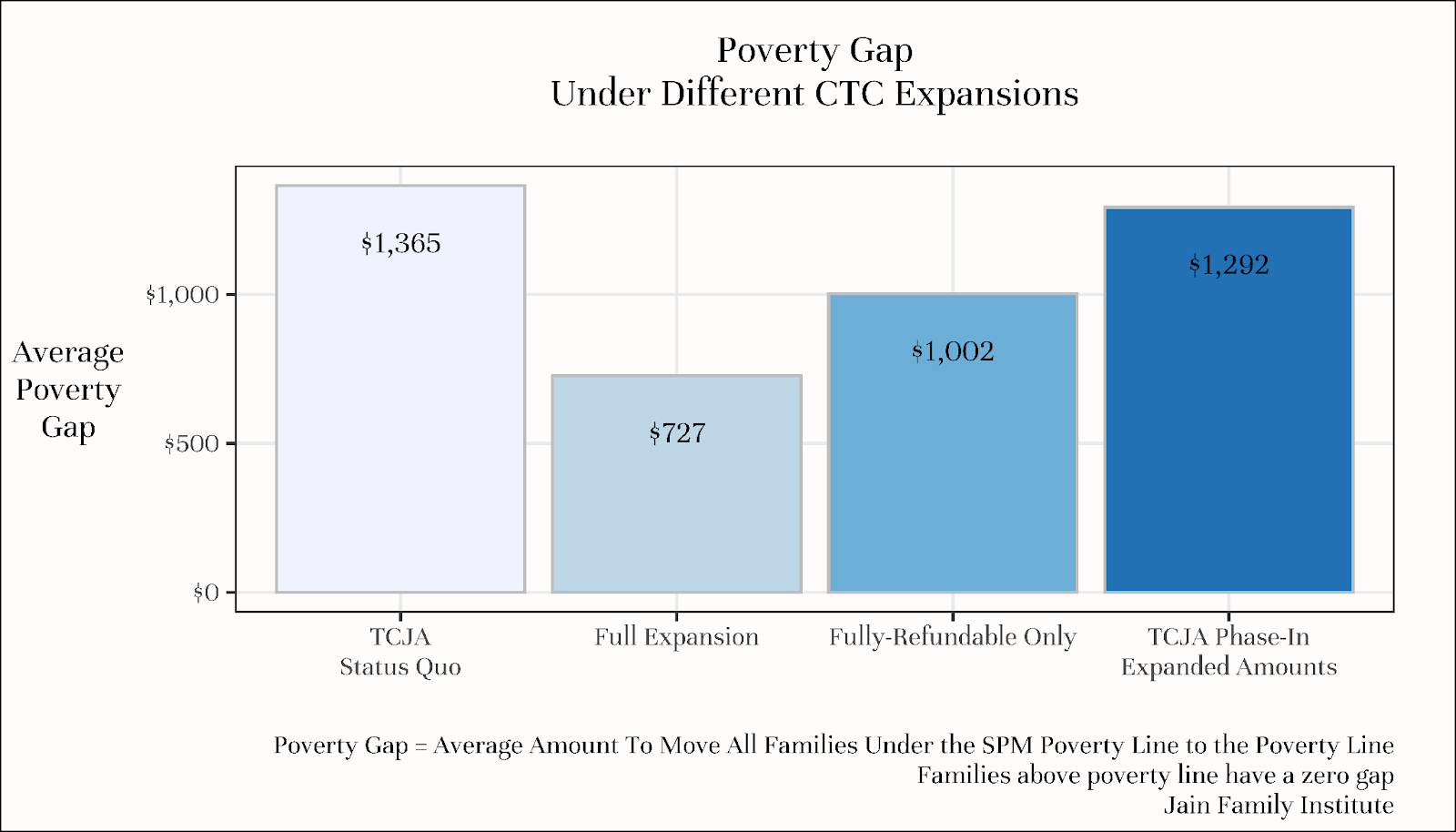 Differential Impacts by Race and Ethnicity 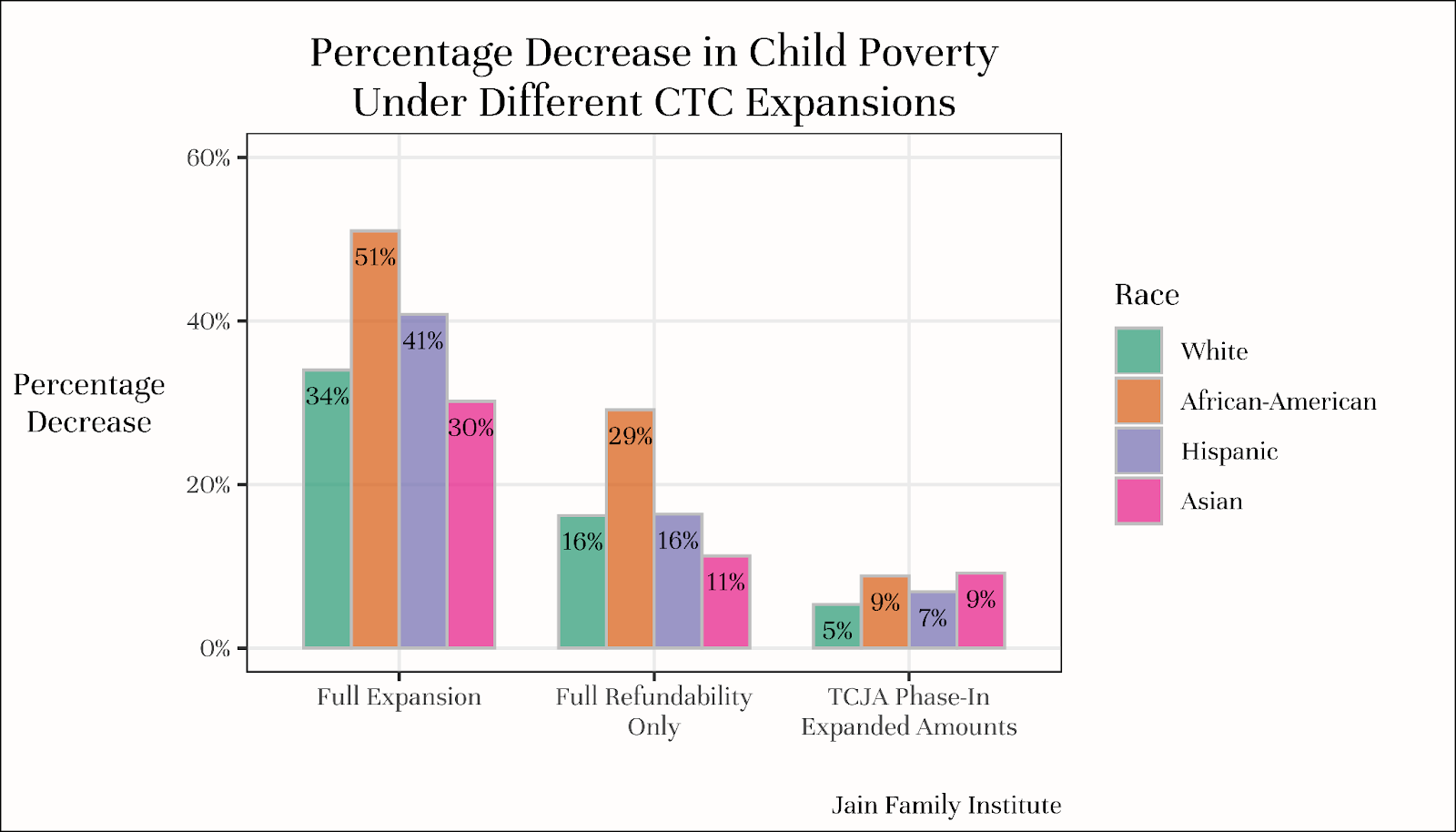 Although disagreements about deservingness and the role of the state underlie negotiations around the form of a CTC expansion, there are also concerns about cost. Reconciliation bills have a maximum dollar amount agreed to early in their development and with numerous competing priorities; Democrats may be looking for ways to cut costs and thus generate space for other programs in the package. In our previous brief we calculated that the full ARPA CTC expansion would add about $99 billion/year to the cost of the pre-pandemic CTC (about $117 billion/year). Expanding the benefit amount but leaving the limited refundability formula in place would cost about $45 billion dollars/year. The Biden plan of solely extending full refundability would increase the cost by about $17 billion/year. Thus the Biden plan would cost less than one that implements limited refundability/an earnings requirement. This makes sense since the limited refundability plan maintains expanded credit amounts far up the income distribution, only beginning to phase out at $112,500 for single filers and $150,000 for joint filers. The Biden plan, by contrast, restores the original $2,000 credit for children regardless of age but extends that credit in full to the smaller number of households on or below the original TCJA phase-in.

Our analysis shows that full refundability does much of the heavy lifting in the CTC expansion—almost half the reduction in child poverty associated with the ARPA CTC expansion could be achieved simply by making the TCJA-era $2000 credit fully refundable. By contrast, the $1,000/$1,600 increase in the credit does little if the TCJA partial refundability formula remains in place. This finding is consistent with the argument the Jain Family Institute has made elsewhere: the best way to combat poverty and to build a strong safety net is to make cash support unconditional. We also find that should cost be a concern, the Biden full refundability plan is cheaper than alternatives that maintain the expanded benefit but reintroduce a earned income requirement through partial refundability. Importantly, the full refundability plan is also more cost effective whether one takes poverty, deep poverty or the poverty gap as a target outcome: it reduces each more than the alternative proposal.

The ARPA CTC expansion represents a sea change in the US safety net. While solidifying the full expansion would do most for reducing child poverty, we recognize that the passage of the Build Back Better plan through reconciliation may necessitate painful compromises. As lawmakers consider what they should cut to ensure other needs are met and guarantee passage, we believe it is vital that they consider the above findings on the impacts of unconditionality.

Read the appendix here for methodological details of the microsimulation.